What does it mean to 'rest in God'?

Sometimes, all you can do is rest in God.

The single life can be maddeningly frustrating at times. You can feel discouraged, lonely, and so soul-tired that you don't know what to do.

That's when it's time to rest in God. It's not giving up. It's not giving in to despair. Rather, it's turning your messed up life over to God to let him fix it. He promised to do just that: 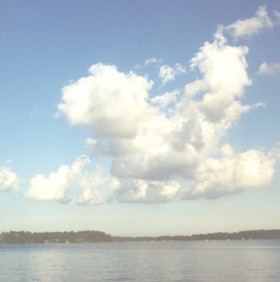 We were never meant to go it alone anyway. Jesus found that out firsthand when he became a human being. He depended heavily on his heavenly Father for support and guidance. When he was exhausted, he went off by himself to rest in God.

And just do nothing?

We're not used to handing control over to anyone else. We want to do it our way, on our timing. We don't trust other people to do things exactly the way we want them, and we have a darn hard time trusting God, either.

But can you think of anyone more competent than God? Can't the all-powerful being who created the universe and who keeps it running take care of your problem?

When you rest in God, you don't tell him what to do or how to do it. You take a break from your trouble.

You sit on God's lap and take a nap.

Some of us need to hit bottom before we're willing to surrender to God's care and protection. We still have the stubborn notion that somehow we can pull it out, somehow we can salvage the situation on our own.

We're not smart enough yet to turn things over to the Professional Problem Solver. We think of God only as a last resort. Amazingly, he doesn't get offended by that. He watches us bang our head into this wall and that, looking with compassion on our foolishness. We run around like hyperactive two year-olds until we can't run any more. He knows what's coming. He knows we'll eventually crumple, exhausted, then ask him if he could help.

He doesn't even seem to mind that we've botched things so badly that they look impossible. For nothing is impossible with God. (Luke 1:37)

Can I help? Please?

Even then, we still can't keep our fingers out of it. We don't completely get what it means to rest in God.

It means trusting. Surrendering. Not interfering. It means having so much faith in him that we can finally have some peace. Again, by losing our life--turning it over to him completely--we gain it.

We finally get it through our thick skull that he always wants what's best for us, and no matter what happens, that's what we'll get. It may not appear so at the time, but he'll make it right. He never welches on his promises.

To our surprise, you're calm. Your anxiety is gone. This resting in God business means exactly that, resting. You're relaxed again. Stress-free.

You'll have this unexplainable assurance that everything's going to turn out all right, even if it does mean a loss. He'll be with you after the loss and will take you into his rest again, anytime you want.

You could kick yourself for not coming to him sooner. Finally, though, you're safe in the Master's hands. You've learned how to let go and rest in God.

Return to top of rest in God.

Does your FAITH need a boost?